Dunlins abroad: from the Canaries back to Estonia

The Southern Dunlin (Calidris alpina schinzii) male (found and photographed by Eric Thomassen in La Palma, the Canary Islands in March) is now back at his home turf in the meadows of the Muhu Island in western Estonia (read about the bird's earlier adventures here).

Of the 53 Southern Dunlins ringed in 2010-2011 in western Estonia at least ten have been seen at or near the ringing sites this spring. Hannes Pehlak has seen an other colour-ringed bird also in Kõinastu. In addition, a Dunlin ringed in the Võilaid (see the map above) island has been around since 2013 in a nearby location at the eastern shore of Saaremaa.

Thanks, Hannes, for the photos!
Posted by Antti Rönkä at 8:59 pm 1 comment:

Dunlins Abroad - From Estonia to the Canary Islands

Spot the Dunlin!
First some background. In May 2011 we (Hannes Pehlak, Veli-Matti Pakanen, Robert Thomson, Jaanus Aua and me) spent a couple of days in the island of Muhu, western Estonia looking for Southern Dunlins (Calidris alpina schinzii), in order to ring them and take blood samples for population studies. The Baltic population of the Southern Dunlins has decimated and is therefore been classified as endangered. Our headquarters was situated in the village of Koguva; we stayed in an old farmhouse of Hannes' family.

Our first Dunlin hotspot was the low-lying Kõinastu shore meadow in the northwestern corner of Muhu.
The very first day, 2 May 2011 I found a Dunlin territory and a nest with a four eggs. Both male and female parent were at the nest, giving alarm calls. I caught the female with a mist net and after ringing it I took a blood sample from the brachial vein. Two days later, 4 May,  I captured the male (see the notebook page below).

VT 5101 is the number of the metal ring. O stands for the right leg, V for the left. "Kel" = yellow colour ring, "Sin" = blue colour ring. "Vihr. lipare" = a green flag. Under the ring information you can see a list of some measurements taken from the bird. 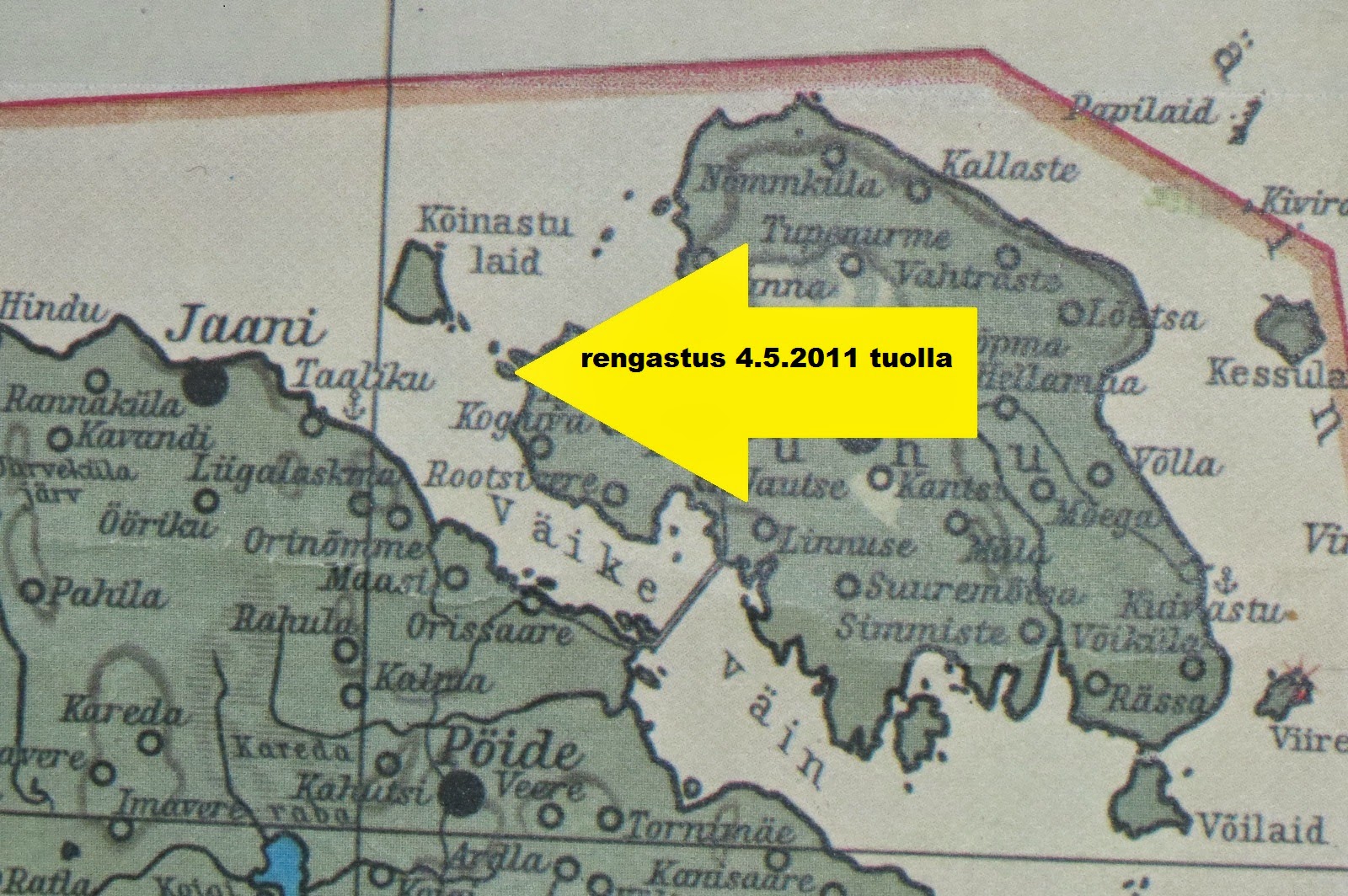 The yellow arrow in the map above points to the exact ringing spot of the Dunlin VT5101. The map is a reprint of a pre-WWII map. In the southern tip of Muhu island lies the other Dunlin site, the island of Võilaid. In addition, we captured Dunlins at the continental shore west of the city of Pärnu.

But that is not all!

Ornitologist Eric Thomassen sent an e-mail (with a couple of photos) to Hannes Pehlak about a colour-Ringed Dunlin that he had spotted in La Palma, The Canary Islands, 8 March 2015. Hannes replied: "...It seems the bird has yellow-blue on left tarsus and yellow-yellow on right tarsus. If so, it's a Dunlin of schinzii-subspecies, ringed as breeding male at Kõinastu coastal meadow (58.624 N, 23.049 E), Saare County, Estonia, on 4. May 2011, metal ring Estonia Matsalu VT5101. This is the most distant resighting of any Estonian Dunlin, and one of most distant from whole Baltic area...".

Eric Thomassen, who saw the bird in La Palma, sent kindly the photos to me, thanks! Here they are:

"My" bird! And in addition, the most distant resighting of the birds that I have ringed. A fifty-gram bunch of feathers, flying thousands of kilometres every year to its wintering grounds an back... isn´t it amazing? Since this bird was ringed in 2011 it has made the journey at least five times. The actual wintering area may be located even further to the south (see a piece on migration of a Finnish Southern Dunlin to western Africa and back, revealed by geolocator data, here).
Posted by Antti Rönkä at 9:43 pm 2 comments: